as i stated previously, i’d purchased “The Complete Photo Guide to Crochet” and in the very back of the book is a gallery of items created by the book’s contributors… 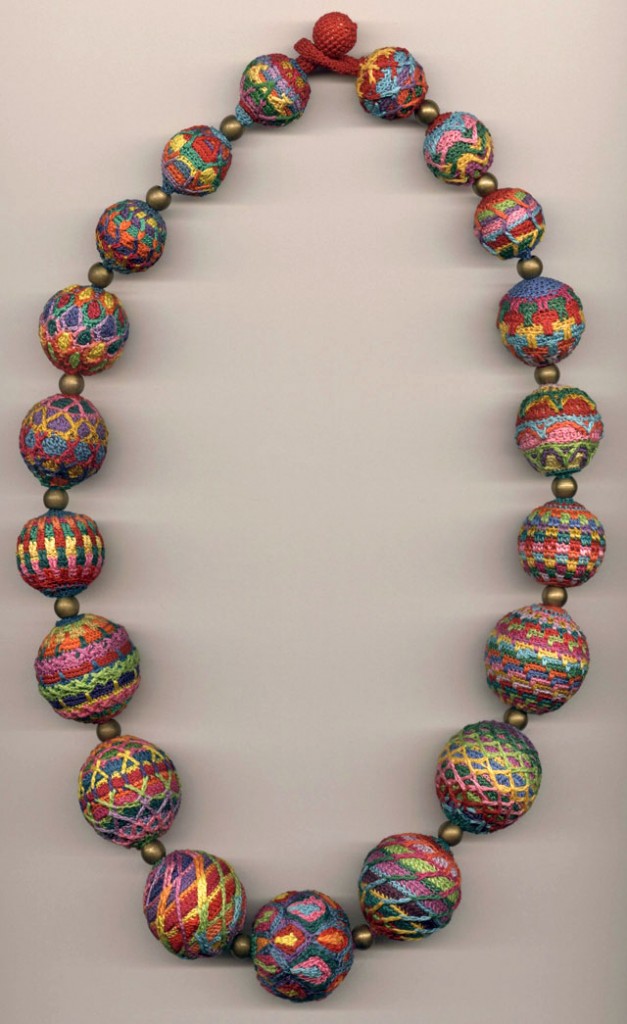 i had to have it. those beads are absolutely beautiful! I HAD TO MAKE THIS NECKLACE!!! but sadly, there was no pattern listed with it 🙁 ~oh no!~ but, of course, being in a wicked frenzy to purchase all the ZOMGTOTALLYAWESOME crochet books i can find, i was *compelled* to stalk google the artist’s name and ~voila~ : melody macduffee – (do NOT miss her gallery), so i ran lickety-split** to buy her “Crochet Overlay Jewelry” book, hoping that the beads would be part of the patterns within. AND THEY ARE!!! along with several other really impressive pieces. i’ve never tried this method of crochet, but the instructions are clear and easy to follow.

just a couple of comments, though, about the designs: all are crocheted with something called “top-stitching thread”. i have no idea what that means. apparently, it’s the size of two strands of standard sewing thread, but no shop that i went to had ever heard the term. also, most designs are made using a .75mm steel crochet hook. let me repeat: a .75mm steel crochet hook.

to give you an idea:

matchbook just for size (i have a collection of matchbooks – who doesn’t?) – i’m not even entirely sure that there’s a HOOK at the end of that hook.

i’m not saying this is impossible (clearly, it’s not). i’m just saying i’m going to need MUCH BIGGER EYES.